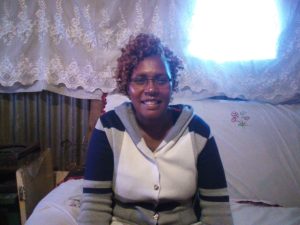 The thing about being affected by a disease and not infected by it is; most people do not really care to know how you are doing. After all, you are not sick and affected as the person infected with a disease such as Tuberculosis (TB). Martha Njoki, or Mama Joyce as referred to more often, knows this all too well.

“Death is bad, but sickness is worse, especially the kind that ravages the body and leaves one a shell of the person they were,” she says as she describes her experience taking care of her MDR-TB infected daughter; who was so ravaged by the disease that she could no longer breathe without the assistance of an oxygen concentrator.

She narrates the constant anxiety and fear she felt while taking care of her sick child, that no matter where she was it was all she could think about.

From the onset when young Joyce fell sick, the journey of diagnosis then treatment ensued- visiting seven hospitals in pursuit of treatment. Until the time of her daughter’s heartbreaking death, Mama Joyce was by her daughter’s side, serving her diligently, caring for her and sacrificing so that her daughter could have what she needed to get better. Joyce was admitted to Kenyatta National Hospital for seven months.

A few months after her discharge, Joyce passed away. She describes the ordeal with unshed tears in her eyes, perhaps remembering the struggle to keep her daughter alive, and failure to do so.

Shortly after her daughter was diagnosed with TB, her husband was also found to be suffering from the same. The burden of his care fell solely on Mama Joyce’s shoulders, and like the good wife and mother she is, she took up the responsibility of caregiver with such grace and poise that I cannot help but be in awe of.

“After visiting Joyce in Kenyatta hospital and tending to her, I would then head back home to Tassia where I would find my husband lying on the couch, weak from TB, and tend to him also,” she reminisces.

She was tired and hungry most days, having walked a distance from the hospital to town after using her fare to buy her daughter a packet of milk, or whatever else she was craving at the time. One of the biggest challenges she faced during this period was lack of money. “The only thing harder than taking care of a sick person is taking care of a sick person while penniless,” She says.

She had to close her vegetable stand and take care of Joyce full time. She knew it would be hard but she was more than willing for the well-being of her daughter.

Martha says the most important lesson she learned while taking care of her sick ones was the need to treat the sick with dignity. “Let us be gracious as we serve the sick and be mindful of the suffering they face, treat them well as they have self-pity and self-loathing, especially with a disease such as TB.”

Sadly, despite all her efforts she still lost her daughter. While she looks well outwardly, she is not whole yet.

“I still wake up anxiously when the lights are off, worried for Joyce,” she says remembering how blackouts were particularly torturous when she had to connect her daughter’s machine to the generator, and having to walk kilometers to buy diesel most nights when it run out of fuel. She also cannot bear to see children in school uniform, particularly those from Joyce’s former school. All it does is remind her of the daughter she loved so dearly and lost.

“Now I am left with a hefty hospital bill to pay, and no daughter,” she says bitterly. Martha and her husband still have a bill of KSH.1.2M (1200 USD) at Kenyatta National Hospital.  She is now looking for gainful employment to enable her to settle the hospital bill.

Despite this looming bill, she remains hopeful and says, “God has been my strength and provider. I am sure something will turn up!” Her strength and perseverance is a thing of beauty. Despite adversity, Martha Njoki remains a beacon of hope and unshaken faith.

Prev PostWHY I AM NOT IN SCHOOL; THE STORY OF TWELVE-YEAR-OLD JOYCE.
Next PostFIGHTING TB THROUGH MUSIC