This edition of Dunda Yangu Base Yangu was even bigger and better than that of 2017! It was packed with excitement, talent and edutainment that was delivered so masterfully to youth from Mukuru, Mathare and Dagoretti. This street-dance-competition-meet-health-information event ran through all weekends of September 2018 and finally culminated in an exciting finale in Sarakasi Dome, Ngara on 12th October 2018. 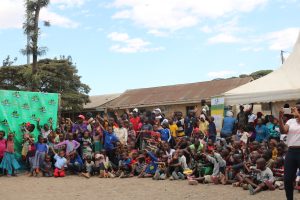 Crowd gathered at Mukuru for Dunda Yangu Base Yangu

Dunda Yangu Base Yangu is a street dance competition through which health information and services are provided in informal settlements. Last year’s theme was ‘KubanjuNaFom’ which is street lingo for ‘Dance with a Difference’. The organisers; primarily Aids HealthCare Foundation in partnership with other organisations such as Stop TB Partnership Kenya, Family Health Options Kenya and others sought to provide a wide range of health services during this event for maximum output.

Stop TB Partnership Kenya (STP-K) is involved in efforts to find Missing People with TB and as such, this targeted screening was aimed at Active Case Finding. Additionally, STP-K distributed Information Education and Communication (IEC) materials and also gave talks on TB to create awareness and arm the young people with information on this infectious disease. 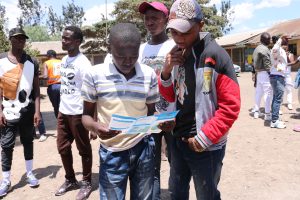 In collaboration with the Nairobi County TB Coordination Team, STP-K was able to reach 2,710 youth with TB information and materials, screen 215 people for TB and diagnosed 3 individuals with TB who have now been started on treatment.

Season two was successful and STP-K thanks all partners who made it possible. Congratulations to Linkers dance group from Mathare who won the title after a rigorous competition among over 30 teams hailing from Mathare, Mukuru and Dagoretti!

Prev PostFIGHTING TB THROUGH MUSIC
Next PostWhy Everyone Should Join the UHC Train.