Street dance with a difference: Dunda Yangu Base Yangu

Most people are well-aware of the detrimental effects of HIV and TB on Kenya’s fabric. These two have caused many families pain and have affected the country’s economy in terms of labour and population.

The youth are particularly at high risk of contracting HIV and TB. The stigma that HIV and TB patients face is an indication that there still lies a lot that needs to be unraveled. Non-governmental institutions, the government and individuals have a major role and milestone to cover in regards to creating awareness and sensitizing the public.

It is in this thought Stop TB Partnership-Kenya, AIDS Healthcare Foundation-Kenya (AHF), Sexual Reproductive Health Rights Alliance (SRHR), NITABAKI-Africa and National Aids Control Council (NACC) have come with an initiative dubbed “Street dance with a difference.” The aim is to sensitize the youth within three locations, that is, Kibera, Mathare and Mukuru and encourage them to get tested for both HIV and TB.

For this dance, the aim is to engage the youth and create a conversation on treatment and prevention of HIV and TB. In addition, inform them on the relationship between the two.

This campaign was successfully launched on 16th June 2017, in a colorful ceremony at the Sarakasi Dome, Ngara. The guest of honor, Dr. Bernard Muya (Nairobi County CEC) emphasized on the importance of this campaign. He emphasized that the youth should either abstain or use protection. Mr. Kibe from the National Aids Control Council added by giving alarming statistics of new infections among the youth in a time span of 24 hours.

To highlight the difference between HIV and TB, Eveline Kibuchi (Chief National Coordinator, Stop TB Partnership-Kenya) stated that HIV lowers the body immunity thus creating a favorable environment for the TB bacterium to thrive. She highlighted the need for TB patients to complete their dosage to avoid the risk of suffering from MDR-TB (Multi Drug Resistant Tuberculosis)

On 24th June 2017, the competitions will be held in all the three locations. The youth are the target audience and thus need for a more proactive approach in countering new HIV infections. Voluntary testing, counseling and treatment are key in the fight against HIV. 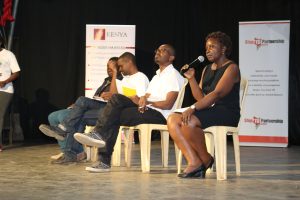